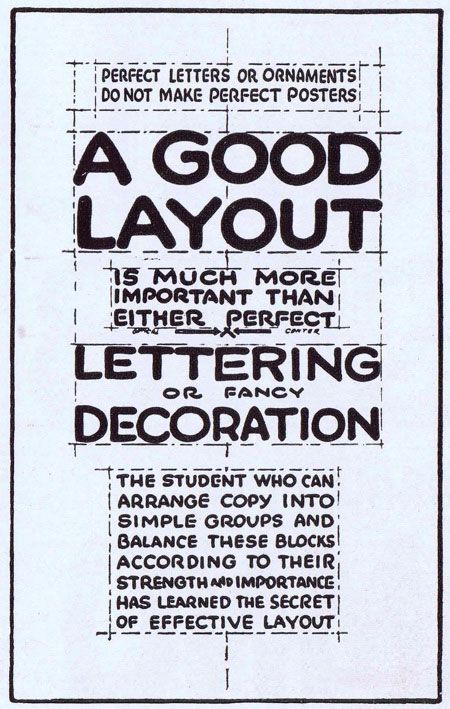 Grids are used to  help designers organize their space and make it make sense.  Gutters are the space between grids to space out blocks of text.
When most people think about grids, they think about engineering and architecture. However, the grid is an essential tool for graphic design as well.

Using a grid is not just about making things be square and line up: it’s about proportion as well. That’s where the “theory” comes into grid theory. Many art historians credit Dutch painter Piet Mondrian as the father of graphic design for his sophisticated use of grids. Yet classical grid theory has influenced successful artistic efforts for thousands of years. The concept of dividing the elements of a composition extends back to the mathematical ideas established by Pythagoras and his followers, who defined numbers as ratios rather than single units.

The Pythagoreans observed a mathematical pattern that occurred so often in nature that they believed it to be divinely inspired. They referred to this pattern as the golden ratio or divine proportion. The basic idea is illustrated in Figure 1.6. A line can be bisected using the golden ratio by dividing its length by 1.62. This magical 1.62 number is really 1.6180339 … It’s an irrational number that’s usually represented as Φ (pronounced phi). Explaining the math used to come up with this number is a bit too involved for this discussion, and isn’t really going to help you become a better designer, so I’ll spare you the details. Besides, my math is a little rusty.

So just what does this ratio have to do with graphic design? In general, compositions divided by lines that are proportionate to the golden ratio are considered to be aesthetically pleasing. The artists of the Renaissance used divine proportion to design their paintings, sculpture, and architecture, just as designers today often employ this ratio when creating page layouts, posters, and brochures. Rather than relying on artistic notion, divine proportion gives us logical guidelines for producing appealing layouts.

The Rule of Thirds

A simplified version of the golden ratio is the rule of thirds. A line bisected by the golden ratio is divided into two sections, one of which is approximately twice the size of the other. Dividing a composition into thirds is an easy way to apply divine proportion without getting out your calculator.

Layout and Poster Design Inspiration Board
Brainstorm what principle of design you are going to use and how you might represent it.  What style or feeling do you want your posters to show?  Look for inspiration and investigate how other designers have used layouts.  Sketch or write as many ideas as possible and create a brainstorming blog post.  Complete Peer Critique 1 with a partner to narrow down to one idea. 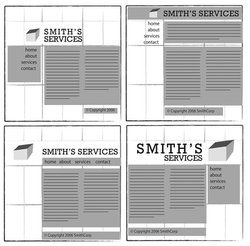 Experiment with creating your idea in many types of layouts.  Decide if you will need any handmade elements photographs and decide on a color scheme and typeface.  Remember you want your poster to illustrate your principle but be an example of good design itself.   Create your Organizing and Developing Blog post.

Start working on your poster in Illustrator.  If you get stuck go back to the tutorials and try to problem solve.  Make a Begin to Create post showing your progress partway through the piece.   When you are ready for feedback, get with a partner and complete Peer Critique 2.

Make changes based on your partner's feedback.  Write a Revise and Refine blog post detailing how you improved your piece.